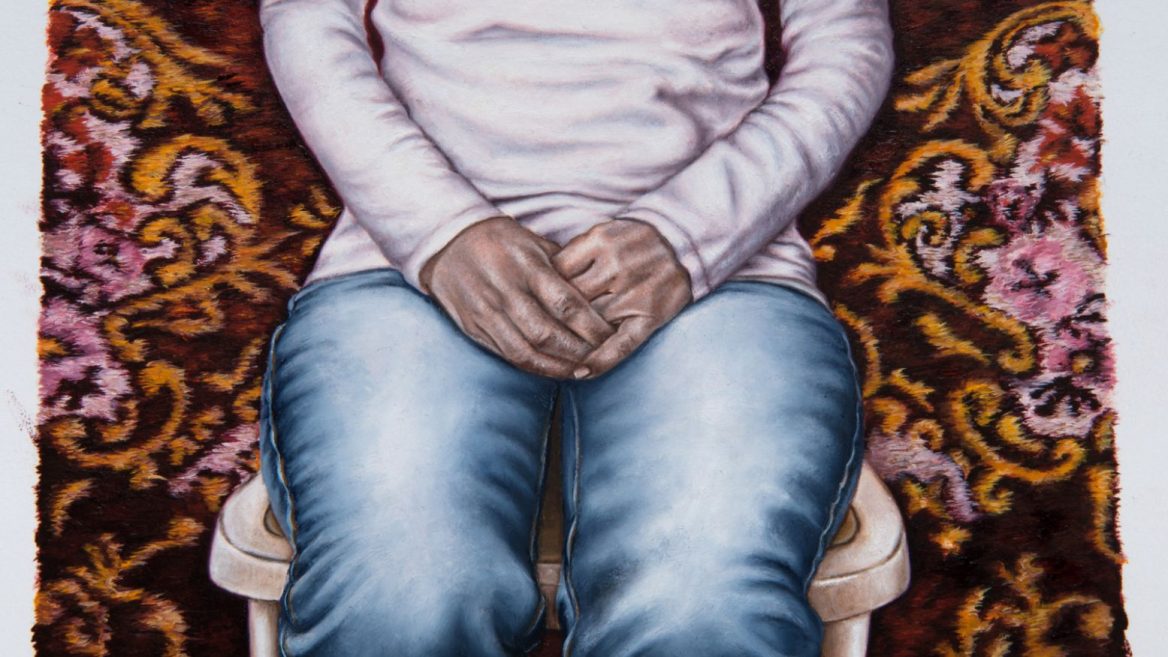 Israel is more often associated with its innovative technology scene than art. But its rich cultural history, stemming from the Middle East, Africa and Europe, and its thriving creative community, have made Israel into a diverse destination for discovering contemporary art.

Within the eclectic art scene are varying points of view, including the work of Arab-Israeli artists whose identity and upbringing in Druze, Christian and Muslim villages around Israel are expressed through various mediums in color, texture, symbol and text.

By examining themes of gender, identity and tradition in Arab society, these artists expose viewers to different perspectives on Israeli culture, forming connections through personal stories.

“The thing that leads us and has for the gallery’s 50 years of existence is, of course, the art. But I think it’s important to be able to give a platform to someone to share their voice, who hasn’t necessarily had the opportunity to do so before,” said Michal Freedman, director at Tel Aviv’s Gordon Gallery and cofounder of Art Source, a new online platform for discovering and purchasing contemporary Israeli art.

Here is a list of talented artists to keep your eye on, whose work can be seen at galleries in Israel and around the world. 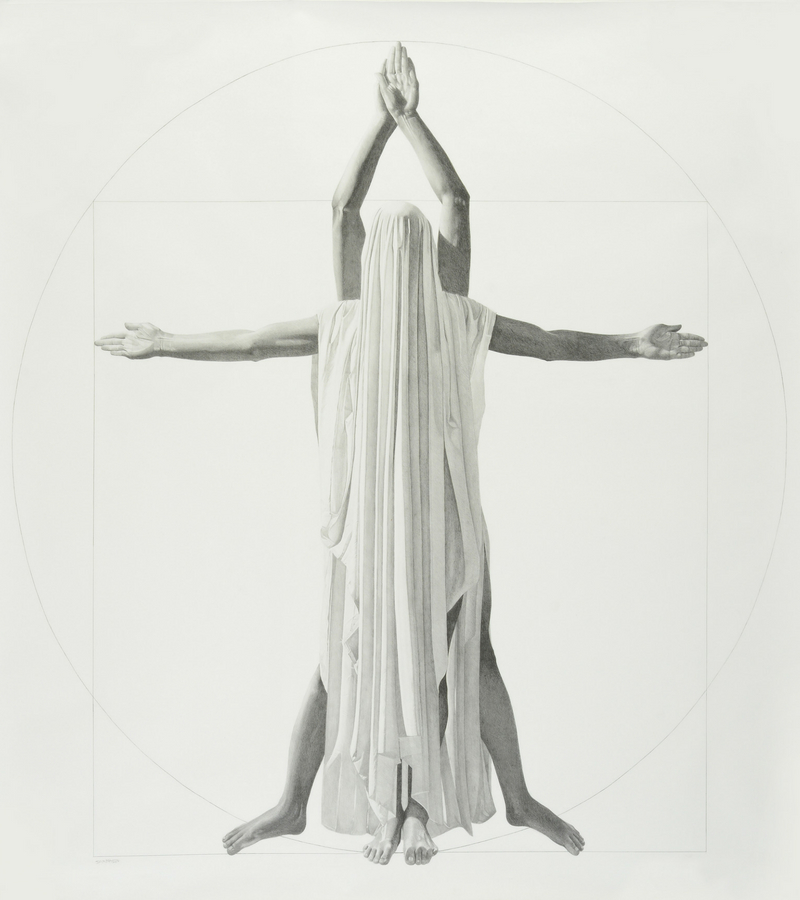 As the recipient of the 2018 Haim Shiff Prize for Figurative-Realist Art, a prestigious award given each year by the Tel Aviv Museum of Art, Samah Shihadi is headed toward the spotlight. In addition to the $10,000 prize, Shihadi will show her work in a solo exhibition at the museum in June 2019.

Born in a small Muslim village in the Western Galilee, 31-year-old Shihadi thought she would return to her village after her studies to become a teacher and raise a family, like other women in her life. Instead she started to draw, depicting Arab women and giving them a voice.

Her delicate pencil-on-paper drawings are often centered around the female body, exploring feminism and the identity of the Arab woman. In a work evocative of Leonardo da Vinci’s masterpiece “The Vitruvian Man,” currently exhibited at Jerusalem’s Museum of Islamic Art, Shihadi depicts a woman rather than a man, whose body is mostly covered by a sheet of cloth, suggesting exclusion or repression.

Shihadi now lives and works in Haifa, where she completed a master’s degree in art. Her work has been shown in shows and galleries across Israel, from Tel Aviv to Haifa, Umm el Fahem and Ramallah. 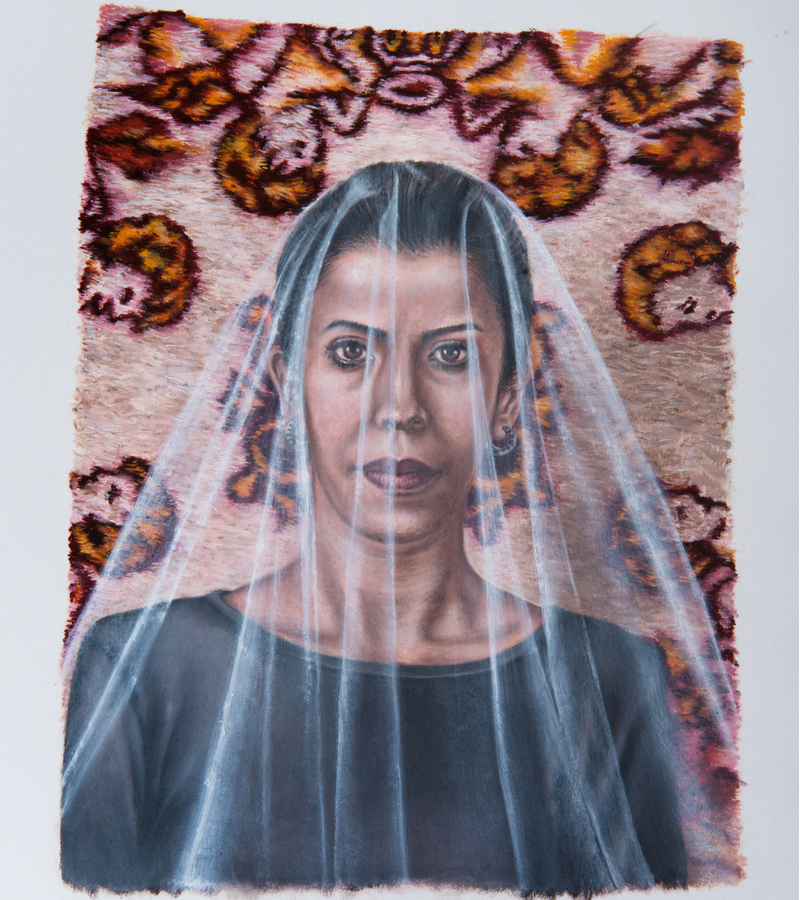 Her 2017 exhibition “Venus Palestina” at Gordon Gallery featured paintings in hues of deep red, interweaving intricate, ornamental fabrics with self-portraits and portraits of her father. The series explores opposing themes of old and young, covered and exposed, whole and incomplete, male and female.

“Fatima’s work represents a voice that we don’t hear enough in Israeli culture and art. I’m honored to be able to be a part of what allows her voice to be heard,” said Freedman, who had been following Abu Roomi’s work for several years prior to representing her at Gordon Gallery.

Abu Roomi is the first Arab-Israeli artist represented by the gallery, which is known for showing the best of Israeli contemporary art. 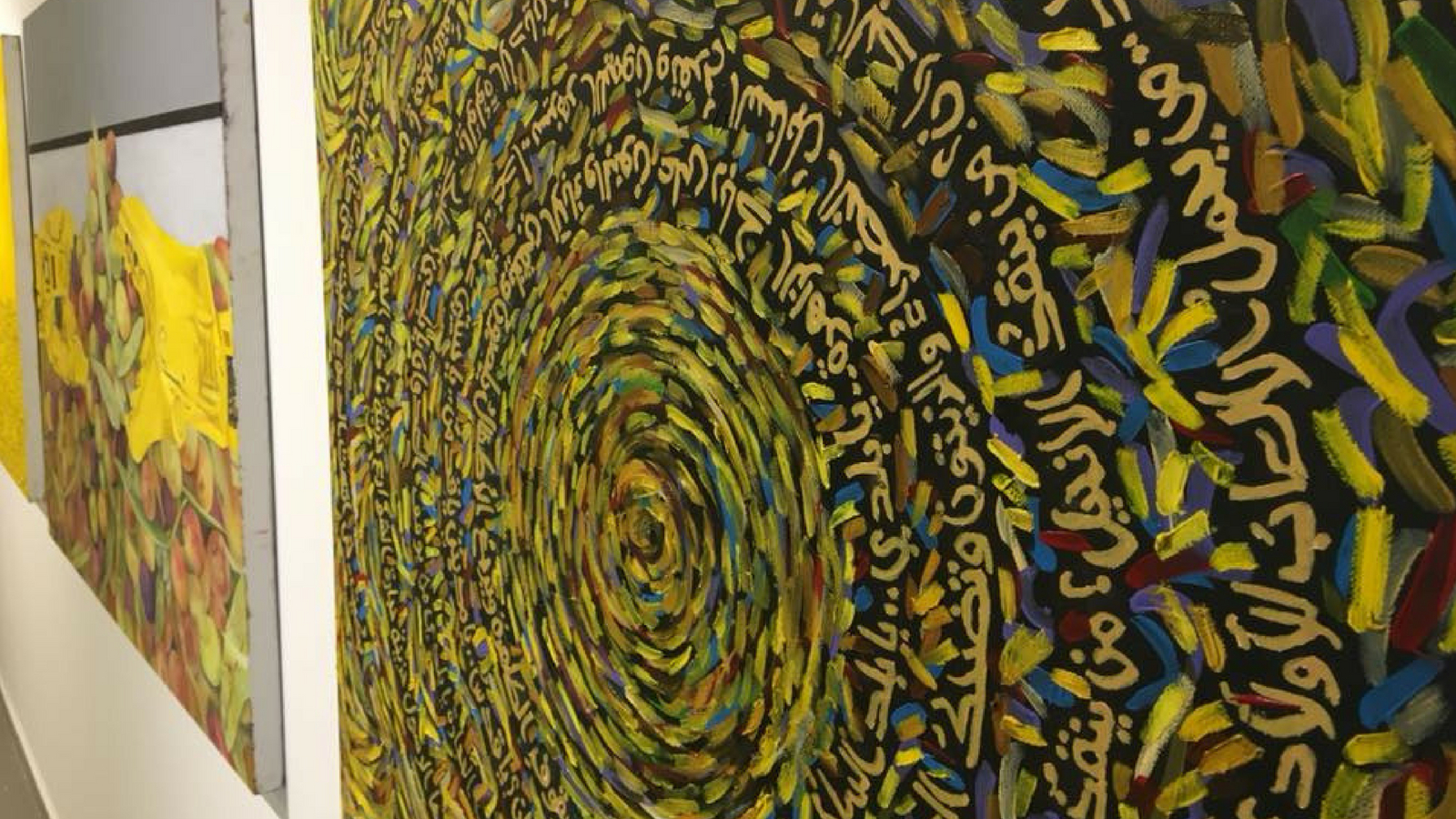 Detail of Fouad Agbaria’s work at his “Sweet and Spicy” exhibition at Umm el Fahem gallery. Photo via Facebook

Agbaria was born in the village of Musmus, near the Arab-Israeli city of Umm el Fahem, in 1983. Since attaining a bachelor’s degree from Bezalel Academy in Jerusalem in 2004 and a master’s degree from Haifa University in 2014, Agbaria has experimented with different styles, techniques and media including charcoal, oil, acrylic and lithography.

His Post-Impressionist style oil paintings feature Quranic verses woven through different landscapes, colors and textures. The symbol of the cactus – or Sabra – is also often shown in Agbaria’s work.

His latest exhibition is “Sweet and Spicy,” a solo show at Umm el Fahem gallery, curated by Varda Steinlauf.

See above video. Read the remainder of this beautiful article on Israel21c.org HERE.