Above video published on Nov 4, 2011 by the LatmaTV YouTube channel.

How ironic that 25 years after Oslo accords were signed giving birth to the two-state solution process, the Trump administration has closed the PLO mission in the US saying the Palestinians have not taken steps to advancing negations w/ Israel? So is the 2-state solution dead?

25 Years after the Oslo Accords: Why Did They Fail to Create Peace between Israel and the Palestinians?

Some diplomatic efforts fail—like the ill-fated Oslo Accords—because of dramatic changes in one or more of the parties. On the 25th anniversary of Oslo, the situation in Israel, Judea-Samaria (the West Bank) and Gaza remains volatile, hostile and dangerous, primarily because one of the parties—the intractable Palestinian leadership—has changed not a bit.

After Oslo, the Israelis, Palestinian Arabs and the whole world waited for the widespread peace that would envelop the Middle East and, by the now-discredited theory of linkage, bring peace to the world’s peoples, everywhere. In addition, if the world’s most intractable dispute could have a peaceful resolution, pundits reasoned, what problem could not similarly be resolved?

Instead, to the contrary, Israelis—despite their economic and social successes—remain under siege in a perpetual state of war and terror. Palestinian Arabs’ lives—while enormously improved economically—remain bitter, with little hope for improvement of their prospects. As for the world, shall we just say that neither Oslo or the Arab Spring has caused the Middle East or any part of the globe to become a sea of tranquility and amity?

So, what happened after Oslo? Sadly, in the most fundamental sense—and where it counted the most—virtually nothing has happened yet.

The first problem is that the mythology that surrounded—and surrounds—Oslo has overwhelmed the actual deal that was made. If we want to break free of Oslo’s failure—and chart a new course—we must first understand the deal’s original goals.

Under Oslo, Israel was ultimately to divide the contested territories into three areas, with the PA given civil and policing powers over the vast majority of the territories and 97% of the Palestinian Arab population . Most other issues were deferred for negotiations over the following five years.

The most critical issues—the status of Jerusalem and refugees, and even the eventual creation of a Palestinian state—were deferred to a nebulous “final status” deal.

But, some things even more important were not deferred: The need for confidence-building moves and a real pursuit of policies conducive to making peace. It was clear then that the insecurity and distrust between the two signatories—and their populations—required diligent efforts by both sides to establish good-will and trust between them.

Despite some admirable security-sharing duties between Israel and the Palestinian Authority, this did not create sufficient confidence between the parties to resolve the most “important” issues. Particularly damaging to trust was the brutal terror of the Palestinian Second Intifada, which murdered over a thousand innocent Israelis.

With the terrorism-rooted PLO in charge of the PA, the PA-administered territories became hotbeds of murder and mayhem. As National Review’s Kevin Williamson recently noted:

“And war is war: there were 169 Palestinian suicide attacks between 1993 and 2016, targeting shopping malls, bus depots, the streets of downtown Jerusalem. In 2014, there were 4,500 rocket and mortar attacks on Israelis. The Palestinians still proudly celebrate their stunning military victory over a pregnant woman, seven children, and five other civilians eating pizza at the Battle of Sbarro.”

In this week’s featured FLAME Hotline article (see below), syndicated columnist Amir Taheri, an Iranian pre-1979 publisher, describes the underlying mythology of the “Oslo Accords” and the “Oslo Peace Process.” His points help pro-Israel advocates understand the dubious Palestinian motives for signing the Accords—and why peace still depends on their actually, finally, wanting and accepting peace with the Jewish state.

I hope you agree with and will support this message.

“If successive U.S. administrations have spent close to a quarter century trying to fit the square peg in the proverbial round hole, Trump seems content to simply call the square a circle.” #Oslo25 https://t.co/uOR6a1qFP3

The Oslo peace process, legitimizing Israel to talk peace with Arafat and his band of PLO terrorists, was doomed to failure from the beginning.

Oslo Was a Mistake From Day One

The arch-terrorist Arafat was persona-non-grata for decades before the Oslo accords. He first tried to overthrow the King of Jordan and take over Jordan. Then he brought destruction to Lebanon in order to take over Lebanon. He failed at both and made himself hated in the Arab/Muslim world. He did all of this while he carried out terror attacks against Israel and murdered Israelis.

Then Arafat supported Saddam Hussein in the first Gulf War. As a result, Hussein expelled hundreds of thousands of “palestinian” Arabs from Kuwait (how often does the media tell you that fact). Due to his support of Saddam Hussein, he became persona-non-grata in the USA as well. And then some left-wing Israeli politicians thought it wise to legitimize him and start an internationally supported peace process with him. Arafat duped them all from day one.

Immediately after the Oslo accords were signed, Arafat gave a speech in Johannesburg, South Africa. There, he basically said that the Oslo accords were just a deal to weaken Israel. Then, later on, they would destroy Israel when they had enough strength. He compared it to a treaty that Mohammed made centuries ago, with that exact same strategy.

Arafat, the PLO, Hamas etc. never wanted a peace deal to establish a state called “Palestine.” Their goal from day one until today remains the destruction of Israel. After failed wars and terror campaigns they just changed their strategy to fake wanting peace.

Read the remainder of the article on IsraelUnwired.com here.

Deconstructing the Oslo Accords 25 years later: Was it a gift or a curse?

By Josh Hasten for JNS.org –

Although the agreement itself didn’t call for the creation of an official Palestinian state west of the Jordan River, subsequent Israeli proposals over the years did allow for such an entity to come into being. All of those offers, however, were rejected by the Palestinian leadership.

Likud Party MK and current Speaker of the Knesset Yuli Edelstein recalls exactly where he was when the Oslo ceremony took place in Washington. “I was driving through Beit Lechem [Bethlehem] when a group of Palestinians surrounded my car waving pictures of Yasser Arafat. It wasn’t a pleasant experience. I felt that this was a celebration of victory over us [Israel], not one of peace.”

Edelstein, who at the time was an adviser to then opposition leader Benjamin Netanyahu, says that “the Oslo accords failed because of the way they were built; it never stood a chance. It was a fatal mistake from the first moment.”

He explains that “it was called Gaza and Jericho first [control over those areas were quickly turned over to the P.A.]. How you can you start by giving away land and calling it a peace process? As I explained to a senior State Department Official when I was a cabinet minister in the first Netanyahu government [in 1996], it’s like the joke about the guy who jumps from the 20th floor, and when he passes the 10th floor, his friends asks him how it’s going, and he says, ‘So far, so good.’ With Oslo, we jumped to the end without first laying the foundations. We shouldn’t go into the business of shaking hands with terrorist leaders and pretending that now we have a comprehensive peace agreement.” 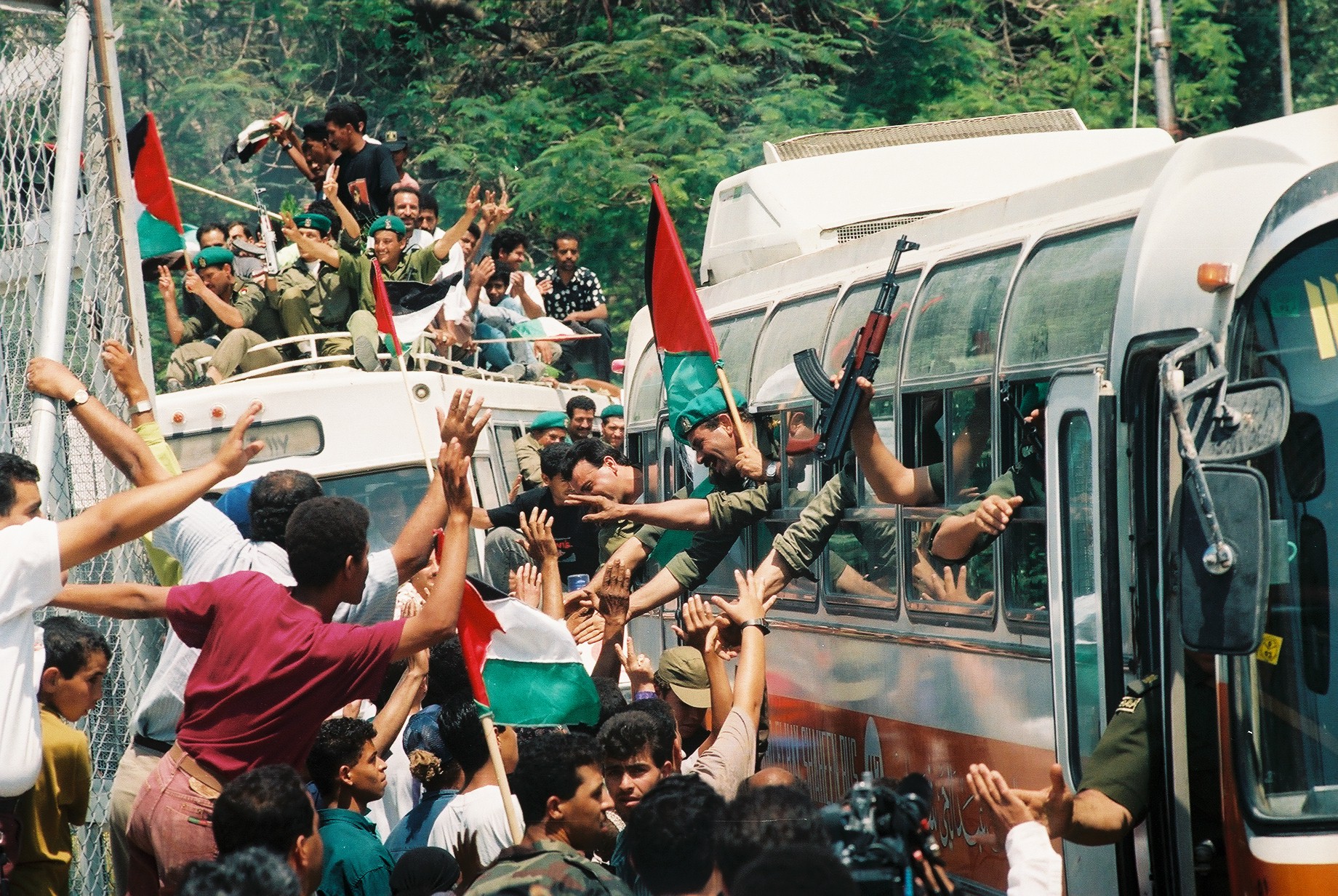 Palestinian police celebrate on their entrance to the city of Jericho, Friday May 13 1994. It was one of the first cities handed over to Palestinian Authority control in 1994, in accordance with the Oslo Accords. Credit: Photo by Yossi Zamir/Flash90.

Edelstein says that for 25 years, nobody has had the courage to officially admit that this is a “dead end,” and to “stop pretending that we are in the middle of a process. There is no Oslo; it’s gone.”

He says that “as the Knesset speaker, I can say loud and clear that there is no solution to the Israeli Palestinian conflict. But still we shouldn’t sit on our hands. We should build coexistence in different ways—build a foundation for peace. It’s not about two leaders shaking hands; it’s about collaboration with our neighbors, like Jordan and others in the region who know Israel is part of the solution, not the problem. There won’t be ceremonies, but there can be cooperation on issues involving water, agriculture and in other fields.”

TV7 Special – The IDF under newly appointed Chief of Staff

TV7 Israel News Special – Iran and the US Midterm Elections

A Timeline Since Israel Withdrew from Gaza