US Secretary of State, Mike Pompeo: “Iran will be held accountable.”

By Zachary Cohen and Jennifer Hansler for CNN, December 12, 2018

But while allies echoed some of Pompeo's concerns, the divide between the US and nations remaining in the Iran nuclear deal was abundantly clear yet again.

Pompeo again claimed that Tehran has increased its ballistic missile activity since the Iran nuclear deal took effect in 2016 and defended the Trump administration's decision earlier this year to withdraw from the agreement.

“Iran has exploited the goodwill of nations and defied multiple Security Council resolutions in its quest for a robust ballistic missile force,” he said. “The United States will never stand for this. No nation that seeks peace and prosperity in the Middle East should, either.”

He also made a case against lifting the arms embargo on Tehran and called on nations to “establish inspection and interdiction measures” aimed at countering Iran's efforts to circumvent existing arms restrictions.

But while several member nations echoed his concerns about Iran's ballistic missile program, a warning that came just a day after the Islamic Republic confirmed it had launched another missile test, the US seemed to stand alone in its assertion that Tehran has violated the nuclear deal known as the Joint Comprehensive Plan of Action.

The security council meets every six months to assess whether Iran is complying with the terms of UN Resolution 2231, which was passed in support of the 2015 nuclear deal, but Pompeo sought Wednesday to emphasize the threat posed by Iran's ballistic program as justification for the Trump administration's withdrawal from the agreement.

“Some have questioned our decision to withdraw from the JCPOA. We reply that it is self-evident why we did so based on the conversation we are having today,” he said. “The JCPOA, has, without a doubt, to date, shielded the Islamic Republic of Iran from accountability to the risks it presents to the world.”

The idea that Iran is in violation is a matter of interpretation, as the resolution endorsing the deal “calls for” a stop to missile tests and other activities but does not explicitly ban them, one of many criticisms that opponents of the pact leveled after it passed.

Still, Pompeo, outgoing US Ambassador to the UN Nikki Haley and other top administration officials are now arguing that Iran is in violation of the resolution because of tests like the one conducted in recent days.

After cataloging a number of developments in Iran's missile program, Pompeo called on the Security Council on Wednesday to hold Tehran accountable.

“We risk the security of our people if Iran continues stocking up on ballistic missiles. We risk escalation of conflict in the region if we fail to restore deterrence. And we convey to all other malign actors that they too can defy the Security Council with impunity if we do nothing,” he said.

“The United States seeks to work with all other members of the council to reimpose on Iran the ballistic missiles restrictions outlined in 1929,” Pompeo added, referring to a 2010 UN Security Council resolution that he called “the strictest resolution addressing Iranian ballistic missiles to date.”

However, the European Union made clear that while Iran's ballistic missile activity is a concern, its view is that the issue should be addressed outside of the nuclear deal.

“We are very concerned about the findings of the Secretary General regarding Iran's destabilizing regional activities. And in particular ballistic missile related activities such as the launch of nuclear capable missiles and any transfers of missiles, missile technologies and components which would be in violation of Security Council resolutions,” the EU said in a statement ahead of Wednesday's meeting.

“Though separate from the JCPOA, we call on Iran to refrain from such activities, which deepen mistrust and increase regional tensions.” the statement said. “We support a comprehensive approach with Iran, based on the pursuit of robust dialogue and, as necessary, targeted pressure, with a view to addressing all concerns regarding Iran's nuclear, missile and regional activities.” 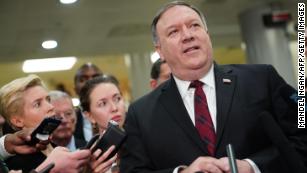 The EU underlined its “commitment and continued support to the full and effective implementation of the JCPOA and resolution 2231.”

“It has been confirmed that Iran continues to implement its nuclear related commitments. The JCPOA has significantly rolled back Iran's nuclear programme and ensures it does not develop a nuclear weapon. This is key for European security,” said the statement from Belgium, France, Germany, Italy, Netherlands, Poland, Sweden and the United Kingdom.

Iranian Ambassador Eshagh Al Habib pushed back against claims that his nation is failing to comply with the nuclear deal and accused the US of violating the agreement by undermining its implementation.

“As it is well-known, the sustainability of the JCPOA has been seriously challenged by unilateral and unlawful conduct of the United States in withdrawing from the JCPOA and reimposing illegal sanctions against Iran,” he said. 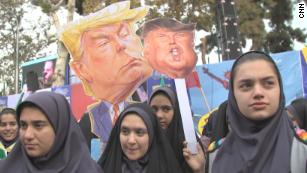 “It is a clear violation of the resolution that calls upon 'all states without exception,' which include the United States, not only to 'take actions as may be appropriate to support the implementation of the JCPOA' but also to 'refrain from actions that undermine implementation of commitments under the JCPOA.' Therefore, the council should consider the US illegal acts as a flagrant violation of the resolution and hold it accountable for such violations,” he added.

CLICK HERE to read the remainder of this extensive report on CNN.com.