Reportedly ‘urgent’ meeting comes amid heightened tensions with Tehran, and with Washington said to be gearing up to release its peace plan.

He said other issues would be discussed as well, without expanding.

Officials in the Prime Minister’s Office told the pro-Netanyahu Israel Hayom daily that the sit-down was “urgent.” 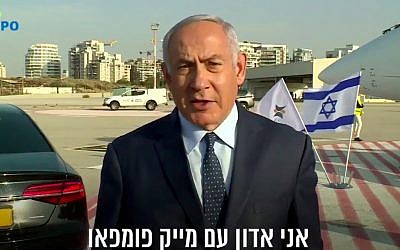 Prime Minister provides a video statement prior to taking off from Ben Gurion Airport for Brussels on December 3, 2018. (Screen capture/Twitter)

The meeting had been scheduled last week and set for Wednesday, but was moved up to Monday because Pompeo will be flying back from Europe early in order to attend the funeral for former US president George H.W. Bush.

Pompeo was in Europe for meetings with top diplomats of NATO countries.

The meeting also comes at a time of heightened tensions with Iran amid reimposed US sanctions, and after Pompeo accused Tehran of testing missiles that could carry warheads to anywhere in the Middle East and parts of Europe, in violation of a United Nations resolution.

Iran said Sunday that it would continue to develop its missile program after Pompeo’s accusations.

Although there are no restrictions in place on the range of Iranian missiles, US President Donald Trump had insisted that limitations be placed on Tehran’s missile program as a prerequisite for Washington remaining in the landmark 2015 nuclear deal with Iran. He ultimately pulled out of it on May 12, ramping up tensions.

There have also been reports of Iran shipping precision guided missiles to the Hezbollah terror group in Lebanon, including a Thursday flight from Tehran to Beirut on an ostensibly civilian cargo carrier.

Without specifically mentioning the flight, the army’s Arabic-language spokesperson Lt. Col. Avichay Adraee tweeted Thursday that Lebanon should stop allowing Iranian planes to bring war materiel into the country, along with a black-and-white satellite photograph of Rafik Hariri International Airport.

Pompeo and Netanyahu last met during the secretary of state’s visit to Israel last April.

The sit-down also comes a week after UN Ambassador Danny Danon told reporters that Trump administration officials had alerted Israel that it has finished structuring its peace plan and that it intends to present it early next year. Danon said that Washington had discussed with Jerusalem the timing for unveiling the proposal.

The Palestinians severed ties with the Trump administration after its decision last December to move the US embassy in Israel to Jerusalem and declare the city Israel’s capital.

The US administration has cut more than $500 million in Palestinian aid since the start of the Palestinian boycott.