New draft of US proposal, which now includes a reference to international law and ‘relevant UN resolutions,’ to be voted on Monday in General Assembly.

The draft resolution will likely be voted on in the United Nations General Assembly on Monday, an official in Israel’s mission to the UN told The Times of Israel on Thursday.

After the US agreed to make some changes to the initial draft, the EU on Thursday agreed to support the text. All 28 EU member states are expected to vote in favor.

“All 28 members will support the US text,” a European diplomat told AFP. 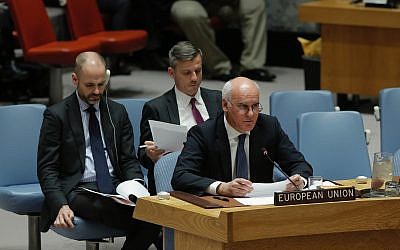 If adopted, the resolution would be the first General Assembly vote to condemn the Palestinian terrorist group. The EU’s support dramatically increases its chances of passing, though it is unclear whether it will guarantee the needed simple majority among the UN’s 193 member states.

Earlier this week, European diplomats said there were disagreements on the proposed US text, notably including references to UN resolutions and to the two-state solution.

The Europeans had asked, and the Americans agreed, to insert a clause that states that a future Israeli-Palestinian peace deal should be “in accordance with international law, and bearing in mind relevant UN resolutions.”

However, the draft still does not make explicit mention of a two-state solution, though virtually all recently passed UN resolutions passed on the subject do.

Both the US and the EU recognize Hamas as a terrorist organization. The new draft of resolution, entitled, “Activities of Hamas and Other Militant Groups in Gaza,” also makes explicit mention of Palestinian Islamic Jihad, another terror group with a large presence in the Gaza Strip.

The draft “condemns Hamas for repeatedly firing rockets into Israel and for inciting violence, thereby putting civilians at risk” and demands that “Hamas and other militant actors including Palestinian Islamic Jihad cease all provocative actions and violent activity, including by using airborne incendiary devices.”

It further condemns Hamas’s use of sources in Gaza “construct military infrastructure, including tunnels to infiltrate Israel and equipment to launch rockets into civilian areas, when such resources could be used to address the critical needs of the civilian population.” 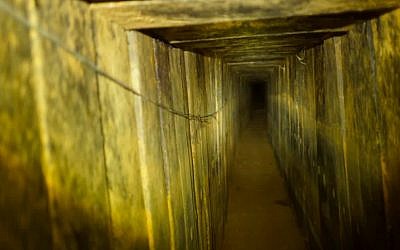 The interior of a Hamas attack tunnel that penetrated Israeli territory and was destroyed by the Israeli military on October 11, 2018. (Israel Defense Forces)

The draft resolution also calls on all parties to fully respect international humanitarian law, “including in regards to the protection of the civilian population.”

It encourages “tangible steps towards intra-Palestinian reconciliation,” as well as “concrete steps to reunite the Gaza Strip and the West Bank under the Palestinian Authority and ensure its effective functioning in the Gaza Strip.”

Addressing the General Assembly’s annual debate on the “Question of Palestine” on Thursday, Israel’s Ambassador to the UN Danny Danon urged the international community to vote in favor of condemning Hamas for the first time in the body’s history.

“Every year, the United Nations adopts at least 20 resolutions specifically to condemn Israel. Not a single one of these resolutions or any GA resolution at all has ever included Hamas,” he said. 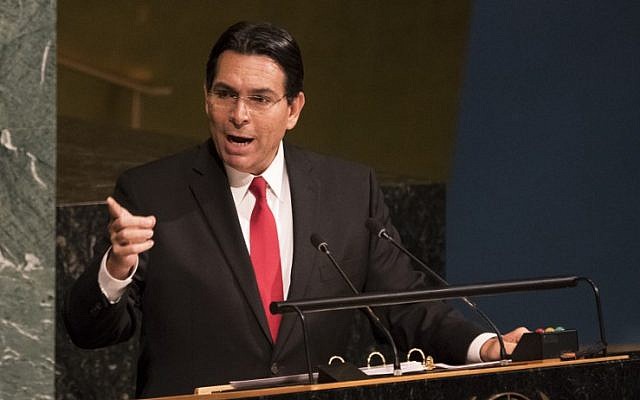 Click here to read the remainder of this extensive report on TimesOfIsrael.com.