An aerial view of the U.N. compound as it looks today. The green line is the current compound, the red line marks the original dimensions allotted by the Israeli government for use by the U.N. It has constructed additional buildings, a gas station, storage facilities, and more: all without building permits or oversight of any kind. (Regavim photo)

A United Nations agency has been accused of breaking Israeli law by improperly expanding its Jerusalem headquarters.

According to Regavim, an Israeli non-governmental organization (NGO), the accusations include illegal encroachment and seizure of public property.

The agency being blamed is the United Nations Truce Supervision Organization. Incidentally, UNTSO is based in the same south Jerusalem neighborhood where the new U.S. Embassy will soon relocate, following President Donald Trump’s decision to move it from Tel Aviv last year.

Regavim says it first discovered the U.N. agency's building activity in March of last year, and petitioned Israel’s Supreme Court to get the government to enforce the law.

The NGO describes itself as a “research-based think tank and lobbying group dedicated to the preservation of Israel’s resources and protection of Israeli sovereignty through unbiased application and enforcement of the law.”

Regavim’s spokesperson, Naomi Kahn, showed Fox News aerial pictures that she said reveals the illegal building. She explained that the unlawful work include demolition of historic buildings, construction of an illegal storage facility and a gas station, which she said has caused environmental damage to the surrounding area. Kahn said, “To make matters worse, the compound has grown through illegal encroachment and seizure of public property from 11 acres to just over 19.”

Eugene Kontorovich, a professor of international and constitutional law at Northwestern University, told Fox News that Regavim’s lawsuit is aimed against the Israeli government to compel them to enforce the law, but the U.N. is shielded by its longstanding immunity. “Immunity means they cannot be sued in court — even if the court agrees their action is unlawful.”

He said, “The U.N. is behaving absolutely lawlessly in Jerusalem. Even if it considers Israel an occupying power, it is bound to heed the municipal and safety regulations of such a power, which are entirely lawful. The U.N. does not own the building and does not pay rent.”

Last summer an understanding was reportedly reached between U.N. Secretary-General António Guterres and Israeli Prime Minister Benjamin Netanyahu during Guterres’ visit to Israel. It’s unclear what was exactly agreed upon since neither side responded to Fox News with a clear answer.

When asked by Fox News for an update, Stéphane Dujarric, the spokesman for the U.N. Secretary General Antonio Guterres, said he had nothing new: “No, no change that I’m able to report to you.” 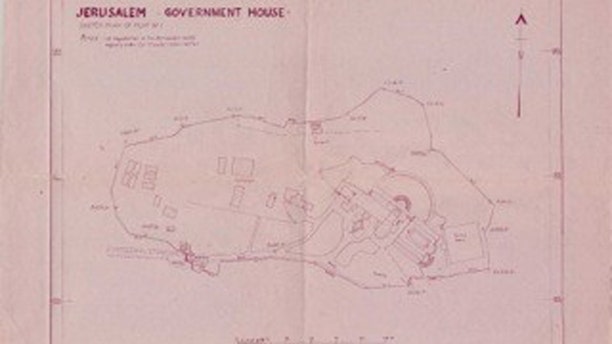 The original Jerusalem Land Registry map dated 14 June 1967 of the area allotted to the U.N. (Regavim)

An Israeli official in Jerusalem who spoke on condition of anonymity told Fox News that, “Like all democracies, Israel is a country where the rule of law is of utmost importance. No individual, or international organization, is above these laws and we expect everyone who visits or is stationed in our country to abide by them.”

Kontorovich, who is also head of international law at the Kohelet Policy Forum, a Jerusalem think tank said he believes the state of negotiations are unclear at this stage telling Fox News that, “The U.N. is not going to concede anything.”

Asked by Fox News whether the U.N. was hiding behind diplomatic immunity, its spokesman Dujarric told Fox News, “I think that those would be wrong accusations.”

Kontorovich said he believes Trump’s recognition of Jerusalem as Israel’s capital should encourage the government of Israel to assert its sovereignty over the site and block the illegal U.N. “settlement activities.” They can do this, for example, by demanding payment or rent, barring contractors from doing illegal work at the site, and even offer the premises to the U.S. as a location, or an annex for the new embassy, which will be in the same neighborhood.”

The UNTSO headquarters sits on Israeli territory captured in the 1967 Six Day War. The U.N. took over the buildings in the 1950s and it has housed the UNTSO, which was originally set up to monitor a truce between Israel and its Arab neighbors following Israel’s War of Independence in 1948. The building used to house the British High Commissioner during the times of the British mandate, and was used as its headquarters.

According to Regavim, the U.N. signed a rental agreement which allowed them to continue to use the site free of charge to house UNTSO’s ceasefire activities. But critics now say that should be null and void since two of the three countries it was monitoring, Jordan and Egypt, have peace treaties with Israel, and Syria is in the middle of a civil war.

Regavim spokesperson Naomi Kahn slammed the U.N. “Not only does the U.N. deny Israel's historic connection to Jerusalem, it violates Israeli law, spits in the face of Israel's democratically elected government and its Supreme Court, and fails to honor the commitments Secretary General Guterres made to Prime Minister Netanyahu.”

Questions sent to the spokesperson for UNTSO went unanswered.

Ben Evansky reports for Fox News on the United Nations and international affairs. He can be followed @BenEvansky