The US consulate on Agron Street in Jerusalem. (CC BY-SA, Magister/Wikimedia)

The State Department announced Thursday that it would bring its main diplomatic mission to the Palestinians under the auspices of the US Embassy to Israel in Jerusalem, marking an implicit downgrading of the facility’s status and a fresh blow to its already strained ties with the Palestinians.

Secretary of State Mike Pompeo said the move was meant to “achieve significant efficiencies and increase our effectiveness” following the opening of the embassy in May. He insisted the merger of the two missions did not signal a change in US policy on the status of Jerusalem, the West Bank, or Gaza Strip.

“The United States continues to take no position on final status issues, including boundaries or borders,” Pompeo said in a statement. “The specific boundaries of Israeli sovereignty in Jerusalem are subject to final status negotiations between the parties.”

Pompeo said US Ambassador to Israel David Friedman would be in charge of the tie-up and that the new Palestinian Affairs Unit inside the embassy would remain, as before, at the consulate general building on Agron Street in the western part of Jerusalem.

“We will continue to conduct a full range of reporting, outreach, and programming in the West Bank and Gaza as well as with Palestinians in Jerusalem,” he said. 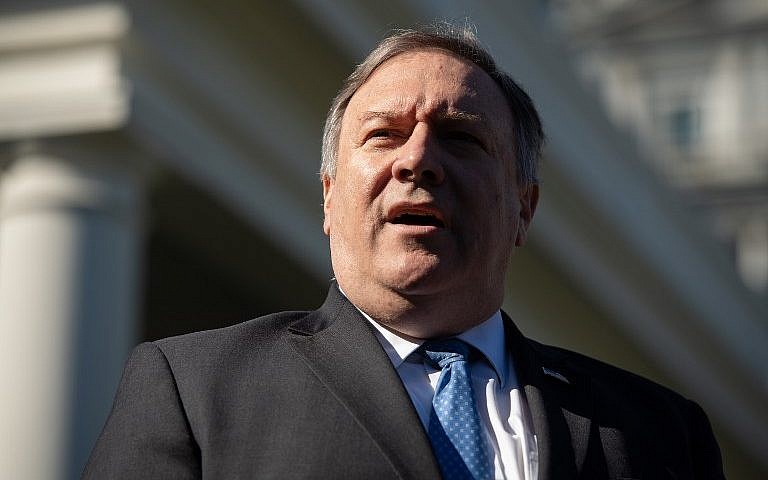 US Secretary of State Mike Pompeo speaks to the press at the White House on October 18, 2018. (Saul Loeb/AFP)

The announcement was met with immediate anger from the Palestinians, who accused the White House of working to bring the entire West Bank under Israeli sovereignty.

“The Trump Administration is making clear that it is working together with the Israeli Government to impose Greater Israel rather than the two-state solution on the 1967 border,” top peace negotiator Saeb Erekat said in a statement.

“The US administration has fully endorsed the Israeli narrative, including on Jerusalem, Refugees and Settlements.”