“Today, On the Eve of September the 11th, I want to deliver a clear, unambiguous message on behalf of the President of the United States. The United States will use any means necessary to protect our citizens and those of our allies from unjust prosecution by this illegitimate court (the UN ICC).”
US PULLS OUT OF UN ICC, CLOSES PLO OFFICE IN DC – VIDEO HERE
Also see article #2 below.

REUNION and REMEMBRANCE
Recharging for the Days to Come
Today, 17 years after the 9/11 assault on the United States, citizens remember.

Seventeen years ago, on a quiet September morning, we awakened our sleeping children for their school day, rushed to grab our cups of coffee, boarded flights bound for work and leisure and set forth on what seemed like any other day.

It was only a few short hours later that we stood in horror as an unspeakable act proceeded to unfold before our eyes.

“Was this an accident?”  we asked at first. The events that followed quickly answered this question.

September 11, 2001 was a day of great tragedy for the United States.  Americans were unprepared for such an event to happen on U.S soil. And yet, as Americans gathered around their televisions to watch the horrific events of that tragic day take place, it seemed every American had the same feelings brewing.

“Our prayers and thoughts and words of consolation go out to all of those who have suffered, but one thing that happens here in this place is when an American suffers and people perpetrate acts against this country, we as a Ccongress and as a government stand united. And we stand together. Senators and House members. Democrats and Republicans will stand shoulder to shoulder to fight this evil that has perpetrated on this nation.

Article 2 –
Bolton: US will use ‘any means necessary’ to protect Israel from ICC war-crime charges
by Times of Israel staff for HAWKINGS BAY DISPATCH, September 11, 2018

ALSO SEE THE VIDEO HERE on our BATTLE FOR TRUTH TV ChannelThe United States on Monday warned the International Criminal Court against prosecution of US or Israeli officials for war crimes in the Middle East.White House National Security Adviser John Bolton called the Hague-based rights body “unaccountable” and “outright dangerous” to the United States, Israel and other allies, and said any probe of US service members would be “an utterly unfounded, unjustifiable investigation.”

In remarks to the conservative Federalist Society in Washington, Bolton said: “If the court comes after us, Israel or other US allies, we will not sit quietly… The United States will use any means necessary to protect our citizens and those of our allies from unjust prosecution by this illegitimate court.”

While “in theory, the ICC holds perpetrators of the most egregious atrocities accountable for their crimes, provides justice to the victims, and deters future abuses,” he said, “In practice… the court has been ineffective, unaccountable, and indeed, outright dangerous.

“For all intents and purposes, the ICC is already dead to us,” he stated.

Bolton added that “While the court welcomes the membership of the so-called state of Palestine, it has threatened Israel, a liberal, democratic nation, with investigation into its actions in the West Bank and Gaza to defend its citizens from terrorist attacks.”

Article 3 –
President Donald J. Trump Wants This to be a New Year of Shalom, Salaam, Peace
by Jason D. Greenblatt from WHITEHOUSE.GOV, September 04, 2018
Shalom. Salaam. Peace.
In Judaism, the word peace is found in the common greeting Shalom Aleichem. In the Muslim world, As-Salaam-Alaikum, or “peace be with you,” is similarly used. The Jewish High Holy Days are upon us and in the machzor (the prayer book for the High Holy Days), the word “Shalom” appears throughout the liturgy, which emphasizes the importance of peace.As the Jewish community prepares to celebrate the holidays of Rosh Hashanah (the Jewish New Year) and Yom Kippur (the Day of Atonement), the Muslim community just completed its holiday of Eid al-Adha (the Festival of the Sacrifice), one of the holiest holidays on the Muslim calendar.

These holidays, and the common greetings of well wishes shared throughout the world each day, inspire us to keep striving to improve each other’s lives and to never yield in our hope for a time of peace.

Over the past 19 months, in pursuit of seemingly distant and elusive peace between Israelis and Palestinians, I have been fortunate to have had many powerful experiences with people in the region. Israelis and Palestinians, young and old, secular and religious, Muslim, Christian and Jewish, are uncertain about the prospects for peace, and their skepticism is certainly warranted. Despite well-known challenges, the people of the region and their dedication to the pursuit of peace have inspired me. People frequently approach to ask me to thank President Donald J. Trump for returning the hope of peace to the region and for bringing its pursuit back into everyday conversation. The people understand that this is an extraordinary challenge, full of evolving complexities, but they support this noble goal.

In my meetings with leaders in the region, they too point to a potential path for peace. The Middle East has changed dramatically since this conflict began decades ago. What seemed impossible only a few years ago is possible now. Tomorrow even more is possible.

Article 4 –
US commemorates 9/11; ceremony begins at ground zero
by Jennifer Peltz and Karen Matthews, AP for the CONCORD MONITOR, September 12, 2017 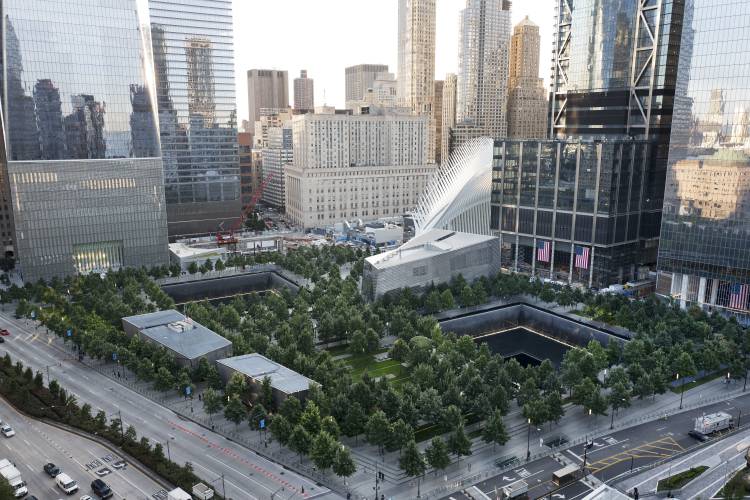 Holding photos and reading names of loved ones lost 16 years ago 9/11 victims’ relatives marked the anniversary of the attacks at ground zero on Monday with a solemn and personal ceremony.
Every Sept. 11 since the date of the deadliest terror attack on American soil, Rob Fazio has come to the place where his father, Ronald Carl Fazio, and thousands of others died.“I’ll come every year for the rest of my life,” the son said. “It’s where I get my strength.”

Thousands of family members, survivors, rescuers others gathered for the hours-long reading of victims’ names at the World Trade Center, while President Donald Trump spoke at the Pentagon and Vice President Mike Pence addressed an observance at the Flight 93 National Memorial near Shanksville, Pa. Nearly 3,000 people were killed when terrorist-piloted planes hit those three sites, hurling America into a new consciousness of the threat of global terrorism.

Some victims’ family members said they couldn’t believe 16 years had passed since a tragedy that “still feels like yesterday,” as Corina La Touche put it while honoring her father, Jeffrey La Touche, at the ground zero gathering.

To others, it was an occasion to thank first responders and members of the military, to express concern for those affected by Hurricane Irma as it continued its destructive path as a tropical storm, or to plead for a return to the sense of unity they felt after the attacks.

“Our country came together that day. And it did not matter what color you were, or where you were from,” said a tearful Magaly Lemagne, who lost her brother, Port Authority of New York and New Jersey police Officer David Lemagne. She implored people to “stop for a moment and remember all the people who gave their lives that day.

“Maybe then we can put away our disagreements and become one country again.”

Article 5 –
Rebuilding Ground Zero: The Architects Behind the 9/11 Memorial and Museum
by 9/11 GROUND ZERO TOUR
June 05, 2017
TRAGEDY, HEROISM:  A Tribute

The 16-acre 9/11 Memorial occupies the site where the former World Trade Center complex once stood. It commemorates the September 11, 2001 attacks, the World Trade Center bombing of 1993, and the thousands of lives lost.Restoring Ground Zero presented an opportunity to not just rebuild, but also to create a narrative about the tragedy and heroism of New Yorkers and Americans on 9/11.

Plans for a memorial were conceived soon after 9/11.  In 2003, an international design competition was held, and it received 5,201 submissions from 63 countries.