REVISITING FREEDOM AND ELECTION – Why Do Muslim Politicians Push Identity Politics? Shireen Qudosi goes back in time to explain why many of the Muslims running for office in the U.S. are pushing identity politics. CLARION PROJECT Video – August 19, 2018

9 Israeli firms protecting us and our kids on social media – The Startup Nation has jumped to the fore as one of the leaders in deterring hackers, securing data and detecting bullies on your social media. ISRAEL21C – Brian Blum – August 15, 2018 – CLICK “Beauty, Diversity & Science” FOR GOOD NEWS!

Article 1 –
Pro-Trump Pentagon Analyst Was Stripped of His Security Clearance by Obama Holdovers
by Debra Heine for PJ MEDIA, August 17, 2018

A Pentagon analyst was stripped of his security clearance by Obama holdovers after he complained of suspicious government contracts with Stefan Halper, the FBI informant who spied on the Trump presidential campaign in 2016, the Washington Times reported. The pro-Trump analyst also apparently ruffled feathers when he blew the whistle on an alleged sweetheart deal with a woman Chelsea Clinton referred to as her “best friend.”

Adam Lovinger, a senior official of the Defense Department’s Office of Net Assessment (ONA), had his security clearance yanked on May 1, 2017, and has been relegated to performing clerical chores ever since. ONA analyzes future threats and ways to defeat them.

Lovinger believes that ONA retaliated against him because he had complained to his bosses about the questionable contracts in the fall of 2016.

After his security clearance was revoked, Lovinger filed a whistleblower reprisal complaint with the Defense Department inspector general against James H. Baker, director of ONA.  The complaint also names Washington Headquarters Services, a Pentagon support agency that handled the Halper contracts, which totaled hundreds of thousands of dollars. 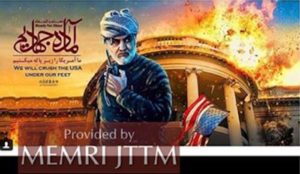 his would be happening if Trump had kept the nuclear deal, you say? Wrong. While Obama was still President, Iran was harassing American ships in the Gulf and issuing bellicose rhetoric. Now they’re issuing bellicose rhetoric.“IRGC Qods Force Commander Qassem Soleimani, Designated By U.S. Treasury Dept., Is Active On Instagram; Posts Include Image Of White House Exploding,” MEMRI, August 16, 2018:

Gen. Qassem Soleimani, who since 1998 has commanded Iran’s Islamic Revolutionary Guards Corps (IRGC) extra-territorial special forces unit, the Qods Force, was designated by the U.S. Department of the Treasury in October 2011 for connection to a plot to assassinate Saudi Ambassador to the U.S. Adel bin Ahmed Al-Jubeir. Earlier, in May 2011, he was also designated under Executive Order 13572, which focuses on human rights abuses in Syria, for his role as IRGC-QF commander, and in July 2005 under E.O. 13382 for his relationship to the IRGC.

Article 3 –
Qatar seeks role in negotiations between Israel and Hamas
by Seth J. Frantzmen for the JERUSALEM POST, August 20, 2018

Qatar has been seeking to play a relevant role in Israel’s Gaza policy amid the crisis with Hamas that has unfolded over the last six months. But those efforts have been frustrated as Qatar is isolated by Washington’s drive for a “deal of the century” and Doha’s own disputes with its Gulf neighbors. Recent cease-fire discussions, however, may now bring Qatar back into the group of countries that are working to avoid another conflict between Jerusalem and Gaza.

Channel 10 reported last week that in June, Defense Minister Avigdor Liberman met in Cyprus with Qatar’s Gaza envoy, Mohammed Al-Emadi. At the top of Qatar’s list of concerns was the humanitarian issue, in which Qatar has taken a key interest for a decade. Doha could provide up to $350 million as part of a new deal to keep the peace between Israel and the Hamas-ruled Gaza Strip. Since 2014, it has already provided around $800 million.

Article 4 –
Episcopal Bishop Forced to Apologize After Making Up Israeli ‘Atrocities’
by United With Israel Staff for UNITED WITH ISRAEL, August 19, 2018

“I was ill-advised to repeat the stories without verification, and I apologize for doing so,” Gayle Harris, Suffragan Bishop for the Episcopal Diocese of Massachusetts, stated.

Gayle Harris, Suffragan Bishop for the Episcopal Diocese of Massachusetts, has apologized for presenting unsubstantiated atrocity stories against Israel during her church’s General Convention in July.

“The fault is solely mine,” she said in a statement issued Friday. “I was ill-advised to repeat the stories without verification, and I apologize for doing so,” she said.

Alan M. Gates, the Diocesan Bishop for the Episcopal Diocese of Massachusetts, affirmed her apology, declaring, “We recognize that for Christian leaders to relate unsubstantiated accounts of Israeli violence awakens traumatic memory of a deep history of inciting hostility and violence against Jews—a history the echoes of which are heard alarmingly in our own day.”

In mid-July, Harris, the second-in-command at the Episcopal Diocese of Massachusetts, testified in favor of the passage of a resolution that condemned Israel for alleged human rights abuses against Palestinian children. In her testimony, she described two terrible acts of Israeli villainy, and said “I was there” when they both happened.

She alleged that “a couple of years ago on the Temple Mount. A three-year-old little boy, a Palestinian with his mother, was bouncing a rubber ball. The ball happened to sort of roll away from him and go over the side down to the Western Wall otherwise known as the Wailing Wall. And immediately, Israeli soldiers camp up to the Temple Mount and attempted to put handcuffs on a three-year-old little boy — for bouncing a rubber ball.”

Article 5 –
Does Israel have a strategy for Gaza?
by Times of Israel staff for TIMES OF ISRAEL, August 19, 2018
…To sum up, Israel does have a short to medium term strategy for Gaza, which like most other strategies contains inherent contradictions and has to be relevant in an extremely complex situation. In the last round of escalation, it proved itself once again, though employing harsher steps against the arson-kites’ operators and their commanders and restricting the activity at Kerem Shalom crossing earlier on could have shortened this round and force Hamas to stop the violence early on.

However, the ongoing instability and provocation from Palestinian forces in Gaza challenges Israel’s ability to sustain this strategy. They are not willing, for example, to give up their force build-up, or to avoid using human shields, and continue to keep corpses of Israeli soldiers in their possession. Their strategy is a turbulent one, one that opposes the idea of stability and prosperity, and this makes sustaining the Israeli strategy so challenging.