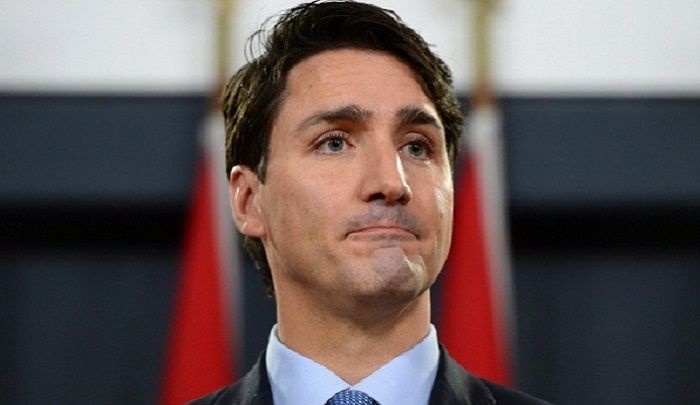 Justin Trudeau has been noticeably unconcerned about Islam. He’s been criticised for his failure to recognize the genocide, by Muslims, of Christians in the Middle East. He was eager to hand over to  Omar Khadr, the Muslim who killed one American soldier, Christopher Speer, and blinded another, Layne Morris, the quite unnecessary sum of eight million dollars, for having spent ten years imprisoned at Guantanamo (some might well think that a short sentence for a murderer). Indeed, Trudeau handed over the money with such unseemly haste that the families of Speer and Morris, who had won civil judgments against Khadr in Utah, had no time to try to block the payment. Although he talks a lot about human rights, Trudeau has been noticeably silent about human rights in Saudi Arabia, one of the most repressive regimes in the world, possibly because he doesn’t want to do anything to endanger a multi-billion dollar arms deal with Saudi Arabia.

So it has been fascinating to see the Saudi reaction to just one tweet by Chrystia Freeland, Canada’s Foreign Minister, after the Saudi government jailed several women’s rights activists, including the sister of Raif Badawi, a human rights activist now in a Saudi prison.  Here was the tweet:

“Very alarmed to learn that Samar Badawi, Raif Badawi’s sister, has been imprisoned in Saudi Arabia. Canada stands together with the Badawi family in this difficult time, and we continue to strongly call for the release of both Raif and Samar Badawi.”

The Saudi government erupted in fury. On August 5, the Saudi Ministry of Foreign Affairs announced it would expel the Canadian Ambassador, recalled its own ambassador in Ottawa, and declared it would freeze all new trade and investments because of Canada’s “interference in the Kingdom’s domestic affairs.” A few days later, Saudi Arabia announced the suspension of state airline flights to Canada and the withdrawal from Canadian universities of all Saudi students, some 16,000 in all. Hundreds of millions of dollars that Canadian colleges and universities were expecting are now not going to arrive. Saudi patients in Canada were told to seek treatment elsewhere. This was all the result of a single tweet.

Many questions remain. If the Saudis are going to freeze “all new trade and investments,” does that include the 13 billion dollar contract for Canadian arms sales to the Saudis? What would Canada have to do to win back Saudi favor? It is inconceivable that the Saudis will back down — these plutocrats, with their sneers of cold command, are used to getting their own way and cannot allow themselves to be seen to bend, and it is just as inconceivable that the Canadians will apologize for what was a single mild tweet, for they have placed defending human rights at the center of their foreign policy. Even Justin Trudeau is backing his Foreign Minister.

What was going on? It has been observed that Crown Prince Mohammed bin Salman, who has been promoting himself all over the West as a “brave new reformer,” is Janus-faced. For while he helped push some changes for women — such as allowing them to drive — he does not like them to presume to take the initiative, or to attempt to pressure the government to “reform” any faster than it, or he,  likes. He is the Crown Prince, after all,  in a family-named and family-owned country, where human rights hardly exist, and the Al-Saud are  masters of all they survey.

Back in April Crown Prince Mohammed made news with a statement that was described as “pro-Israel,” for stating that the Jews had a right to a homeland. His father King Salman “reaffirmed the kingdom’s steadfast position towards the Palestinian issue and the legitimate rights of the Palestinian people to an independent state with Jerusalem as its capital,” the official Saudi Press Agency said. Among his envious rivals for power — all those half-brothers and cousins — he was said to be, as a result of his surprising comments on the Jewish state, too accommodating to the Western Unbelievers. He needed to do so something to prove he was tough. Internally, having granted women the right to drive, he may have felt he could not allow a dozen women’s rights activists to push, on their own, for further changes in the rights accorded to Saudi women. If there was to be change in the status of Saudi women, it would have have to be his change, for which he would receive the credit, and not a reaction to pressure from below. He is keenly aware of his critics, those who think that he has already done quite enough for now for women, who deplored his remarks in April about Israel, and who see him as a media-hogging prima donna, far too eager to be well-thought of in the West.

What better way to reassert his credentials as a tough guy and opponent of the West than to take the opportunity provided by the Canadian Foreign Minister’s tweet to stand up to the West, in a display of fury intended to placate his critics at home? Then there followed in rapid succession the expulsion of the Canadian ambassador in Riyadh and the withdrawal of the Saudi ambassador in Ottawa, the ending of all Saudi flights to Canada, the calling back of all Saudi students enrolled in Canadian schools, and — most devastating –the freezing of all “new” Saudi trade and investment deals with Canada, which may include (it’s still unclear) a 13-billion-dollar arms contract that has been signed.

But having shown his mettle in how forcefully he’s dealt the Canadians, Crown Prince Muhammad now has gotten himself into quite a mess. For what’s to come is still unsure. It seems scarcely conceivable that the Canadian government, so proud of its moral code, would take back its criticism of the Saudis for jailing activists, given how much it prides itself on its attention to human rights. But unless the Crown Prince manages to obtain something by way of an apology, he cannot possibly back down.

What might he fabricate, in order to construe it as an apology, not from the Canadian government, but better still,  from the “plain people of Canada”? He could forget about trying to extract a statement from the Canadian government, and instead announce that the Saudis have received huge numbers — quantity unspecified — of messages from Canadians who were “embarrassed by, and apologetic for, their own government’s presuming to meddle in the affairs of a friendly country,” and that they, the Saudis, regarded that as “a more meaningful and thoughtful message than the ill-considered tweet of a single person who did not understand the Saudi situation, but decided to preach to us about rights, though we never comment on Canada’s internal affairs, and because of her office, was given undue attention. We declare this matter closed.” Something like that might do the trick, save the Saudi students from trying to enroll at this late date in non-Canadian schools, keep those Saudi planes flying into Toronto, reassure the Canadians about that 13 billion dollar arms contract which both Canada and Saudi Arabia have a vested interest in preserving, and allow Crown Prince Muhammad to declare a victory.