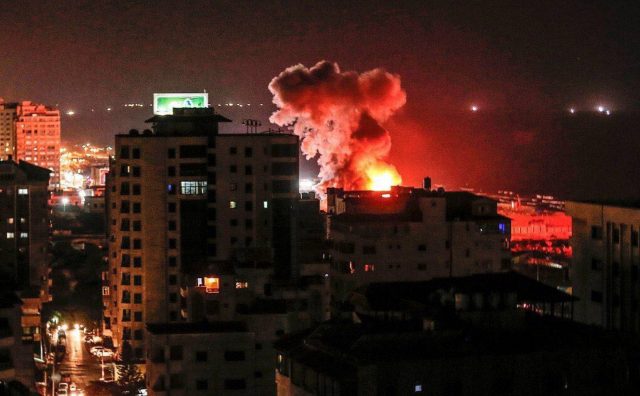 Red alert sirens sounded nearly non-stop overnight on Wednesday and early Thursday, as approximately 200 rockets and mortars were fired at Israel from Gaza, wounding 19 Israelis. The initial barrage of eight rockets landed inside the city of Sderot, hitting a house and wounding a man and a 13-year-old boy. According to Barzilai Medical Center, six people were treated for physical wounds and nine were treated for shock.

Rockets continued to be fired into Israel Thursday morning as a fresh wave hit southern Israel just after 10:00 AM, reaching deeper into Israel than previous missiles. Red Alert sirens were heard as far away as Ashkelon, more than 26 miles from the Gaza border.

Article 2 –
Dozens of rockets fired at south; IDF pounds Hamas targets in Gaza
by Judah Ari Gross for the TIMES OF ISRAEL, August 08, 2018

Residents of southern Israel told to stay near bomb shelters as military strikes ‘terror targets’ in Strip; Hamas says operative killed, as well as pregnant woman and her daughter

Dozens of rockets and mortar shells were fired at southern Israeli communities from the Gaza Strip on Wednesday night and into Thursday, including one barrage that slammed into the city of Sderot, injuring several Israelis, prompting the Israeli Air Force to bomb at least 12 Hamas positions across the Gaza Strip, the military said.

The air force also targeted one car that the army said was being used by terrorists to launch rockets at southern Israel from the Strip. One Hamas operative was reportedly killed in the airstrike. Unconfirmed reports claimed he was the relative of a senior Hamas commander.

Hamas said a 23-year-old pregnant woman and her infant daughter were killed in another strike. The woman’s husband was reported moderately injured.

Hamas, the Palestinian Islamist group that rules the Gaza Strip, says it wants Israel and Egypt to keep the border crossings with its coastal territory open on a permanent basis. The message that Hamas has been relaying to Israel and Egypt has been along the lines of: If you seek a cease-fire, you must reopen, on a permanent basis, the Kerem Shalom commercial border crossing (with Israel) and the Rafah terminal along the border with Egypt.

JERUSALEM (JTA) — After firing more than 180 rockets into civilian areas, armed terror groups in Gaza said Thursday afternoon that they would refrain from firing on southern Israel if Israel also maintains the calm.

Shortly after the announcement, however, more rockets were fired from Gaza at Israel. Code Red rocket alert sirens were sounded as far away from the Gaza border as Beersheba, the first time that sirens have gone off in the city since the 2014 Gaza War. At least two rockets exploded in open areas near Beersheba.

The firing of rockets from Gaza and retaliation by the Israel Defense Forces led U.S. Middle East peace envoy Jason Greenblatt to suggest in a tweet that the Hamas leaders in Gaza were leading the Gazan Palestinians to the brink of war. ““Hamas regime again is launching rockets at Israeli communities,” he wrote. “Another night of terror & families huddling in fear as Israel defends itself. This is the Hamas regime’s choice. Hamas is subjecting people to the terrifying conditions of war again.”

An IDF official also suggested that Israel could get into another war with Gaza over the attacks.

“After a night of more rockets, we don’t see an end to the escalation. We are closing in on operation in Gaza,” an unnamed senior military officer said  Thursday. He said Hamas has been on a course of “conflict and friction” since late March.