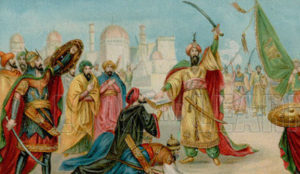 Today’s Ramadan inspiration from my new book The History of Jihad From Muhammad to ISIS comes from Muslim Spain, that celebrated beacon of tolerance and multiculturalism. The tolerance of Abd al-Rahman III, the tenth-century Umayyad caliph of Córdoba, is illustrated by the eleventh-century Muslim historian Ibn Hayyan of CoÌrdoba as he details a typical incident when Christian prisoners were brought into the presence of the caliph:

Muhammad [one of the officers of Abd al-Rahman III] chose the 100 most important barbarians [that is, Christians] and sent them to the alcazar of CoÌrdoba, where they arrived Friday, 7 of the yumada I [March 2, 939]…All the prisoners, one by one, were decapitated in his presence and under his eyes, in plain sight of the people, whose feelings against the infidels Allah alleviated, and they showered their blessings on the Caliph. The death of these barbarians was celebrated in a poem by Ubaydallah b. Yahya b. Idris, saying:

Defeated the prisoners arrived,
Carried and shackled by Allah,
Like an angry lion you looked at them,
Surrounded by wild lions and dragons,
And in plain sight of everyone your sword annihilated them,
Among blessings and praises to Allah.

Click here to preorder The History of Jihad, the first and only comprehensive history of jihad — not just the jihad in tolerant and pluralistic al-Andalus, but against all of Europe, India, Africa and worldwide — in the English language.