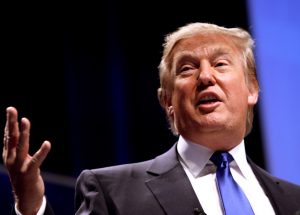 EXECUTIVE SUMMARY: US President Donald Trump has referred to his peace plan as “a good deal,” but unlike in the business world, agreements between peoples are only valid for the moment. Agreements are always temporary, awaiting a strategic shift in which everything is reconsidered.

President Trump’s decision to recognize Jerusalem as the capital of Israel occurred against the backdrop of his ambition to devise a comprehensive peace proposal for Israel and the Palestinians. The pressures and threats emanating from leaders of the Arab world, as well as from EU countries, ought to raise questions about the basic assumptions that are guiding the president as he seeks what he has called “the ultimate deal.”

When he took office a year ago, Trump declared that as an experienced businessman, he would lead the sides to a deal that would be advantageous to both of them. Yet it must be asked: How is it possible to speak of this issue in terms of a deal?

In the business world, the aim is to lay a legal groundwork that ensures that a signed deal will not have to be reopened for negotiation. The negotiating period is subject to challenges and surprises, but from the moment the matter is signed, it is final.

Agreements between states and peoples, however, are likely to be revisited as national interests change. Even if negotiations and agreements between states show a behavioral pattern similar to what transpires in the business world, a crucial difference remains: peoples have national aspirations that are stronger than any agreement. Those aspirations are not under the control of leaders and cannot be conceded in negotiations. They continue to arouse passions even when their fulfillment has been deferred. A redemptive deal simply cannot be made in a conflict that is as complex and fraught with conflicting national-religious dreams as the Israeli-Palestinian conflict. How far, after all, can any people be expected to go in giving up its dreams?

Between politics and humanism

What is involved here is a basic issue regarding the motives behind human behavior. It is reflected in a recent debate among Western intellectuals about the place and role of nationalism in the emergent global order. Alexander Yakobson (Haaretz, October 31, 2017) put the question well: “Can an ideological movement forgo a sacrosanct principle it has sworn never to forgo? Yes – if the constraints of reality are sufficiently difficult and ongoing.”

My conception of human behavior is different: the constraints of reality can indeed bring even ideological leaders to a compromise, but the resulting agreement is always temporary and awaits a strategic shift in which everything will be reconsidered.

National passions can be repressed and deferred, but they do not dissipate. A hundred years after the downfall of the Ottoman Empire, Turkish passion for lands that were under Turkish control before WWI continues to burn and to drive President ErdoÄŸan’s regional policy and activity. Much the same is true for the Iranians: the golden age of the kingdom of Darius impels their current logic. Even an agreed national border does not obstruct national longings that await their hour.

This is not only true in the Middle East. For millions of Germans, the cities of Breslau and Danzig – which, after WWII, became the Polish cities of Wroclaw and Gdansk – are still part of the German homeland.

The dispute here extends far beyond the Israeli-Palestinian conflict. It is a controversy between political realism and humanist idealism, rooted in different premises about the essential logic that drives the behavior of human society. In the basic enlightened, liberal outlook, the world can and should be in a positive moral equilibrium.

This ideal situation will be achieved, so it is argued, if we just manage to remove obstacles, to work out a good deal and a satisfactory arrangement, to put reality on a course of prosperity and development. Because human beings are basically reasonable creatures, they will be able to stabilize their behavior patterns within the existing framework, under the conditions of peace. When humanity emerges from darkness into light, it will never want to return to the darkness. That, in brief, is the premise of the Enlightenment. In recent decades, has it met the test of reality?

Therein lies the conceptual failure of the liberal Western intellectual. It is doubtful whether the president’s deal-making emissaries – Jason Greenblatt and Jared Kushner – can be saved from the failures of their predecessors.

An end to the “occupation”?

If one regards national agreements as temporary by nature, one is not surprised by what Yasser Arafat, before entering Gaza in the summer of 1994, said in response to a skeptic who was critical of the Oslo Agreement: “The day will come when you will see thousands of Jews fleeing Palestine. It will not happen in my lifetime, but you will see it in your lifetime. The Oslo Agreement will help fulfill that vision.”

It was with similar logic that Hamas leader Khaled Mashal explained his support for the two-state solution: “Some fear that it may be an opening to a path that others have taken, with the great dream growing smaller in the end, and I say no. I believe that the liberation of Palestine on the 1967 borders is a goal that can be achieved, and from a practical standpoint I believe that whoever liberates Palestine on the 1967 borders will liberate the rest of Palestine.” That is the Phased Plan in a nutshell.

A good deal is supposed to benefit both sides. Even if they did not get all they wanted, each side is fortunate to have attained what it did. At least, that is what is supposed to happen.

Efraim Karsh, in his 2016 study “The Oslo Disaster” (Begin-Sadat Center for Strategic Studies), notes that when the IDF completed its withdrawal from the populated parts of the West Bank in January 1996, Israel thought it would stop being accused of being an “illegitimate occupation.” The withdrawal from all the population centers in Gaza had already been fully implemented earlier, in May 1994. And indeed, once the retreat from the West Bank had been carried out as well, elections were held for the Palestinian National Council, and the Israeli Civil Administration’s rule over most of the Palestinians came to an end. Ahmed Tibi, Arafat’s adviser at the time, declared, “From now on there is a Palestinian state.” Yossi Sarid and Yossi Beilin made similar assertions and expressed relief that the occupation had ended.

Yet Israel continues, in 2018, to be accused of being an “illegitimate occupation.” How has the world managed to miss that for a large majority – about 90% – of Palestinians, the occupation actually came to a halt in January 1996? All the more so, how can it be that even after the complete withdrawal from Gush Qatif in 2005, the Gaza Strip is still viewed internationally as a territory under Israeli occupation?

What, then, can the Trump initiative promise if this time, too, after Israel gives the Palestinians what they demand, the recompense is still lacking? It may be that, notwithstanding enlightened expectations, another agreement not only would not constitute a “good deal,” with both sides forgoing national aspirations, but would intensify them interminably. From an Israeli standpoint, it needs to be understood that in a business dynamic, today’s concession is viewed as a starting point for tomorrow’s talks. In such a reality, what is needed are skills other than those that succeed in the business world.

Maj. Gen. (res.) Gershon Hacohen is a senior research fellow at the Begin-Sadat Center for Strategic Studies. He served in the IDF for forty-two years. He commanded troops in battles with Egypt and Syria. He was formerly a corps commander and commander of the IDF Military Colleges.